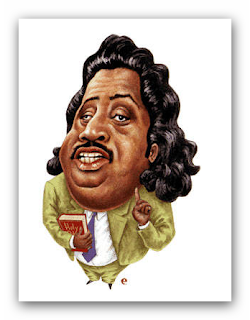 The Orlando Sentinel’s Rene Stutzman reported that in the Trayvon Martin killing, Martin followed George Zimmerman to his SUV.  When he caught up to him, Martin confronted him, asking whether George “had a problem,” to which Zimmerman replied, “No.”  Martin responded, “You do now,” or words to that effect.  Martin then punched Zimmerman in the face, knocking him to the ground; Trayvon jumped on him, and repeatedly bashed the back of his head into the pavement.  This is when Zimmerman fired.
Zimmerman is Hispanic; if both people had been Hispanic, the media would have yawned.  If both of them had been black, the legacy media would have suppressed the story as stigmatizing to the “community.”  However, since the National Enquirer types mis-identified Zimmerman as white, the vultures are circling, the jackals are yipping, and the civil rights shysters are howling for yet another expansion of extra privileges and benefits and still fewer requirements for individual responsibility for the racially challenged.
This Trayvon Martin situation is merely Al Sharpton-Tawana Brawley redux.  According to this Slate article, in 1987, Brawley claimed that at least two and possibly six white men, one of them carrying a badge, had repeatedly raped her.  Sharpton and company quickly expanded the travesty, claiming that on 33 separate occasions a local prosecutor named Steven Pagones had kidnapped, abused and raped Brawley.
Finally, in apparent desperation, Sharpton…accused a local police cult with ties to the Irish Republican Army of perpetrating the alleged assault.  A grand jury investigation concluded in late 1988 that Brawley was not the victim of forcible sexual assault and that the whole thing was a hoax. 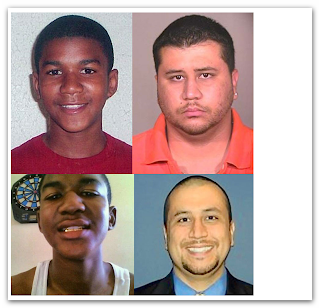 Prosecutor Pagones won a $65,000 judgment in a defamation lawsuit against Sharpton and his cronies, but The Rev was able to duck responsibility for his actions because Johnnie Cochran and other Sharpton benefactors subsidized the payment.  Gosh, what a shock!  Cochran and other civil rights industry hustlers who benefit hand-over-fist from sleazy media and official government policies of racial discrimination in favor of melanin-positive people welfared Sharpton out of bearing commensurate consequences for his actions.

The photo above depicts a cherubic preadolescent Martin next to a surly and hostile looking Zimmerman.  Below that is a more current Martin photo sporting gang-favored gold capped teeth and a smiling Zimmerman.


There seems to be a pattern here of manipulating media, avoiding responsibility, and exploiting contrived and invented opportunities.  Jim Goad observes in his Taki’s Magazine article “Travonosaurus Rex,” that crass opportunists are using [Martin’s] corpse as a political Macy’s Parade balloon.  True to form, it seems that Sharpton, Jackson, et al are trying to help their constituents profit at public expense from dead relatives.  These mercenary rabble-rousers have a history of this sort of unseemly behavior.
Half-retarded “racial arsonist” Al Sharpton, apparently unashamed of showing his face in public after supporting the dubious causes of Tawana Brawley, Crystal Mangum, and the Jena 6, naturally fled down to Sanford, FL and led a mostly black crowd in a series of primitive chants and possibly subliminal voodoo incantations. The Reverend Jesse Jackson, still unscathed by last year’s charges of gay harassment, reared his porpoise-shaped head to claim that if Zimmerman is not arrested, “the protests will intensify and spill over into other dimensions,” which sounds vaguely threatening.
Threatening indeed, the riots and other Beat Whitey cowardice that are likely soon to come will follow the usual pattern.  The action will begin at liquor stores and pawnshops, spreading quickly to jewelry, clothing, electronics, and furniture outlets.  This will occur spontaneously in numerous metropolitan areas coordinated by sociopaths using cell phones and other similar electronic communication devices to advise their cohorts where to go for the looting.  Just like last time, Eric Holder will be too busy to bother investigating the people who use FCC regulated airways to conspire and direct wholesale looting, assault, arson, burglary, and destruction of property.
When will we learn that this government reflects its own interests and not those of ordinary Americans; hopefully, it come before November.  May your gods be with you.

Rational civil discourse is encouraged. No vulgarity or ad hominem attacks will be posted.